Introduction: the site and its geoarchaeological survey 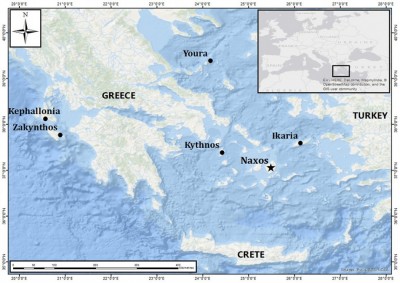 Figure 1. The island of Naxos, and main locations in the text.

This article introduces new work at Stélida on the north-west coast of Naxos (Cycladic Islands, Greece), a source of chert that we demonstrate to have been used extensively in the Middle Palaeolithic and Mesolithic periods (Figure 1).

Despite the fact that hitherto the earliest direct evidence for activity in the Cyclades was the fifth millennium BC (Late Neolithic), an earlier prehistoric date was tentatively suggested when the site at Stélida was discovered in 1981 (Séfériadès 1983). The site remained a chronological enigma until recent rescue excavations led to claims of Middle–Upper Palaeolithic and Mesolithic activity (Legaki 2012). In 2013 we initiated the Stélida Naxos Archaeological Project (SNAP), a two-year survey dedicated to characterising geoarchaeologically the chert source and associated knapping areas. In the first season a contiguous area of c. 24ha was systematically surveyed with transects and grids, centring on the chert outcrops at the top of the 118m-high hill (Figure 2). The chert occurs in thick tabular beds, has a semi-vitreous or waxy lustre, and is light grey to white in colour (Figure 3). The best-quality chert is found at Stélida’s southern peak and it is here that we find the greatest concentrations of knapped artefacts (Figure 1). Petrographic, chemical and techno-typological analyses are underway to characterise the Stélida products, in order to document their presence elsewhere in the Aegean and thus reconstruct the socio-economic networks that intersected here. 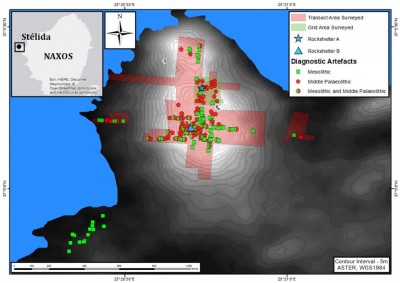 Figure 2. Location of Stélida on Naxos, transects and grids surveyed in 2013, and the distribution of diagnostic earlier prehistoric artefacts.
Click to enlarge 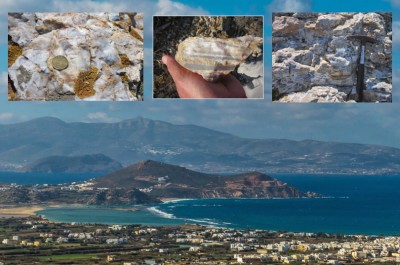 Figure 3. View of Stélida from the west, and raw materials.
Click to enlarge 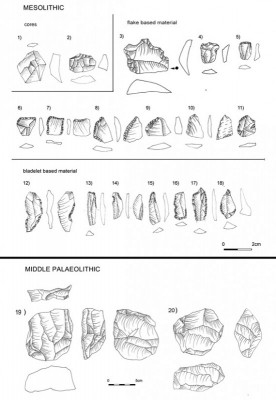 The Palaeolithic and Mesolithic finds

In 2013 we detailed two main phases of exploitation, Middle Palaeolithic and Mesolithic; these artefacts are quite distinct from Cycladic Neolithic–Bronze Age blade industries. The Mesolithic assemblage is flake-based (from multidirectional cores), with only a small proportion of bladelets and blade-like flakes (Figure 4). Linear retouch is dominant, followed by numerous notches, denticulates, piercers/borers (‘spines’) and end-scrapers; backed pieces are relatively rare. The material is microlithic in character, but generally lacks true geometric pieces. On the basis of the assemblage’s techno-typological characteristics the Stélida lithics can be located within the ‘Early Holocene Aegean island lithic tradition’ (Sampson et al. 2010: 68–69), comparable to excavated material from Ikaria, Kythnos and Youra (Figure 1). Much of the Stélida material might thus be dated to the Lower Mesolithic (ninth millennium BC), with some evidence of Late Mesolithic activity (eighth millennium BC).

Middle Palaeolithic activity is documented across the site, both near the best-quality chert outcrops and in front of two small (<3m²) rockshelters (Figure 4). The material is dominated by blanks from a diagnostic discoidal core technology (including déjeté flakes), followed by Levallois flake and blade industries, the latter from large uni- and bi-directional cores (Figure 5). While the tools include characteristic Middle Palaeolithic transverse-, inverse- and end-scrapers, denticulated and notched pieces are dominant; points are rare. 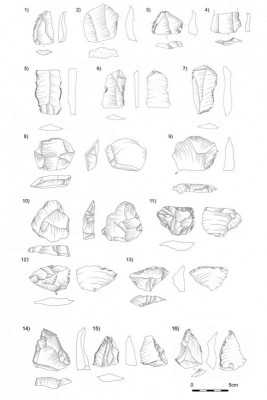 A key research question is whether this material was the product of intense moments of exploitation or instead represents quarrying and knapping activity over the long-term during the Middle–Late Pleistocene. Precisely dating the Middle Palaeolithic activity, however, remains difficult. Tool-type ratios suggest parts of the assemblage might be tentatively assigned to the Denticulate Mousterian facies of the Mediterranean coast which first appears in Western Europe during Isotope Stages 7 and 5 (c. 243–130 ka BP), becoming more popular during Stage 3 at c. 50–38 ka BP (Thiébaut 2010: 379, fig. 25). The Levallois blade component has an earlier range of dates, being a diagnostic element of early Middle Palaeolithic assemblages on the Greek mainland and sites of the last interglacial in Western Europe and around the Mediterranean c. 130–80 ka BP (Huxtable et al. 1992). To the east, Levallois blades are earlier still, a feature of Levantine early Mousterian assemblages dated c. 250–160 ka BP (Meignen 2007: 134–36). The presence of macro-tools such as notches and backed pieces might similarly indicate an earlier date, being characteristic of lower Middle Palaeolithic Clactonian industries. It is important to note that the Stélida blades are quite distinct from Upper Palaeolithic laminar products, deriving from flat rather than volumetric nuclei; indeed we currently have nothing diagnostic of Upper Palaeolithic date.

The Stélida material thus provides evidence of human exploitation of the Cyclades far earlier than previously thought, and the Middle–Late Pleistocene dates are in accord with new evidence of early human occupation and/or visitation of Crete (Broodbank 2013: 154). Moreover, in the Aegean and the Mediterranean more generally, Denticulate Mousterian and Levallois technologies are associated exclusively with Neanderthal populations, whereby the Stélida finds arguably provide the first evidence for Neanderthals on Naxos, and in the Cyclades more generally.

Stélida is a rare example of a Middle Palaeolithic chert extraction and tool production site. The characterisation of the site and refinement of its chronology (ideally with absolute dates from excavated strata) will improve understanding of the earliest exploitation and colonisation of the Cycladic Islands and the wider Aegean basin. While it is tempting to assume that Neanderthal use of the Stélida source occurred only during those periods of glacial sea-level lowstands that allowed a dry route from the mainland, recent sea-level reconstructions associated with Middle Palaeolithic sites on the islands of Kephallonia and Zakynthos suggest that we cannot discount the possibility of limited Neanderthal ‘seagoing’ to reach the quarry (cf. Broodbank 2013: 108). In turn, Mesolithic activity on Naxos definitely required seafaring and the desire for Stélida chert helps us to understand some of the reasons behind the Late Pleistocene–Early Holocene ‘birth of Mediterranean maritime culture’ more generally (Broodbank 2013: ch. 5).